Why Do We Count Babies’ Ages in Months? 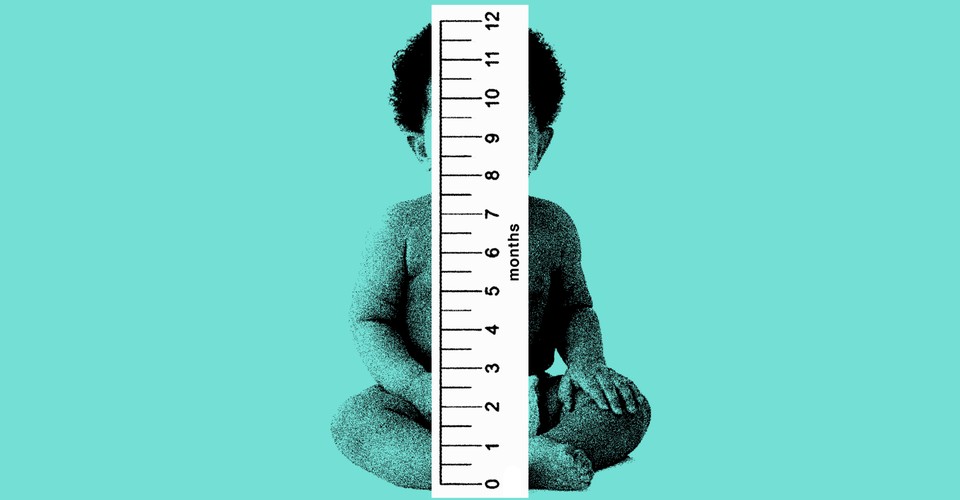 
Last spring, the medical technician who swabbed my daughter for COVID-19 laughed at me when I told him she was 13 months old. In retrospect, I could have said, simply, “She’s 1.” But when he asked Madeline’s age, I defaulted to the language of the pediatrician’s office and the playground: counting babies’ ages in months or even weeks. The issue was trivial, yet it still makes me cringe more than nine months later. My shame was fundamentally about how I had lapsed into parroting the vernacular of motherhood without really understanding why—and how I was now doing it all the time. Hadn’t I found the ultra-specific measurement of baby age insufferable before I gave birth? When did I start talking like a parent? Who had I become?

The truth is that those of us with kids—myself included—are often pretending that we know what we are doing while constantly looking to experts for clues. This includes picking up age-related nomenclature from the physicians who care for our families. Typically, doctors measure baby age in months until the child is 2 or two and a half years old, in part because kids grow fast. More than 1 million new neural connections form every second in the first few years of a child’s life; the cerebellum, responsible for balance and motor development, more than doubles in size in the first year alone. The distinctions between a 13-month-old and a 21-month-old—both “1” if measured in years—can be dramatic.

So pediatricians use small increments to check developmental milestones. Healthy babies can demonstrate new behaviors at different times, but certain issues should be spotted sooner rather than later. “I’ve seen kids born with teeth. I’ve seen kids not … get teeth until a year and a half. I’ve seen kids who have skipped crawling and go straight to walking,” Asad Bandealy, a pediatrician who now works on healthcare access in Washington, D.C., told me. “But when it comes to [delayed] development, generally speaking, intervening early makes a big difference.”

Caregivers might pick up this language from the doctor’s office, but the way we talk about our babies’ ages is also part of how we relate to one another. After becoming a parent, everything you think you know about how to operate in the world is profoundly disrupted, and every month of your baby’s existence also marks the time since your life began a new era. When you meet another parent at the playground or grocery store, asking how old their children are helps you understand the single biggest influence on their time. Is the child nine months, perhaps starting to crawl and making a mess everywhere? Have they recently crossed the four- or five-month mark and begun possibly—mercifully—sleeping through the night? Is the child eating solid food? Walking? Talking?

These conversations can sometimes tip into judgment. As a new mother, I was stressed by others’ assumptions of what my daughter was or wasn’t doing at her age, because she had a slight delay in gross motor skills. Plenty of parents experience harsher interactions. According to national data, in 2020 more than 427,000 children ages 2 and under received early-intervention services, which means that they did not align with typical developmental stages. (That number likely undercounts how many children would benefit from these services.) Sarah Alshaikh, a former therapist and a stay-at-home mom in Las Vegas, told me about a stranger in a mom’s meetup group who first assumed that Alshaikh’s 1-year-old was walking and talking, and then questioned why he was doing neither. Her son has a rare genetic disorder called KCNQ2, which manifests on a spectrum; whether he will ever talk is unclear. “I wanted to just disappear,” Alshaikh said. She wishes other parents would instead ask what her child is like and what he enjoys doing—who he is, rather than who he isn’t.

Even though I’ve found talking about my daughter’s age awkward and embarrassing, those weekly and then monthly milestones have had another use: proof of the passage of time after I gave birth in March 2020. I can’t tell you how many fellow mothers and fathers have said to me, “The days are long, but the years are short,” which is nauseating but also true. (A study from last year found that parents perceive the passage of time differently from nonparents.) The timing of my early parenthood—synchronized tragicomically with the pandemic—magnified this effect. Seemingly everything had shut down: There were no visits to the hospital from grandparents, or “mommy and me” classes, or trips to the library. Vaccines wouldn’t be available to me for about another year, my doctor husband would soon start treating COVID-19 patients, and my daughter and I would stay at home together for the first 11 months of her life. Tracking the minutiae of how long she’d been alive was evidence that we weren’t completely trapped in time. Life, somehow, was moving forward. Madeline was growing as a child, and I was growing as a parent. I looked forward to those age-pegged pediatrician appointments not just because they were the only time I saw other adults, but because I got to reflect on how much my daughter had changed since the previous visit.

Read: Becoming a parent during the pandemic was the hardest thing I’ve ever done

Soon, Madeline will turn 2, and we’ll measure the rest of her life in slow and steady years. It’s a bittersweet moment for us—the end of a chapter when my husband and I learned to be parents together and the three of us regularly took refuge from crowds at a local orchard. It will also signal that we’ve lost multiple developmental stages to the pandemic—giving birth, taking a newborn home, breastfeeding, Madeline’s first solid foods and steps and words. But the days don’t feel so long anymore, and finally parenting is fun. Now I’m the one approaching dazed new parents at the playground. I don’t ask them their kids’ age anymore; I ask them what their kids love. Madeline has entered a new phase, and so have I.

One other COVID Surge is Right here, However It Might Be Much less Extreme