What I’ve Been Eating, Reading, Watching, and Listening To… 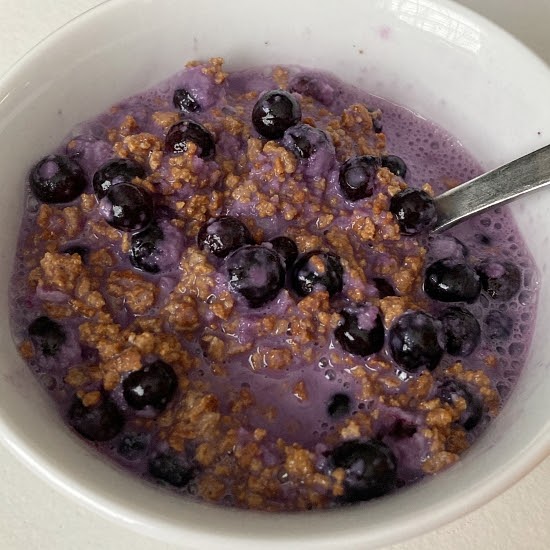 
I haven’t done one of these posts in a while, and I wasn’t sure if I’d even be able to come up with much to put on this list! I usually mention things like books I’m reading or good food I’ve eaten on my Friday Night Photos posts (which are basically a recap of my week). After yesterday’s post, though, I decided to see what I could come up with for one of these lists I used to do…

What I’ve Been Eating…

For weeks now, I’ve been eating the same things for breakfast and lunch every single day. I go through phases sometimes where I’ll latch onto a particular food or meal and I will eat it day after day for months or (even over a year!).

Right now, breakfast is Grape Nuts cereal with frozen blueberries and almond milk. I started eating this because I was looking for high-fiber foods that I knew I liked already. I hadn’t had Grape Nuts in a long time and I had some frozen blueberries in my freezer. I don’t thaw out the blueberries first; when mixing in the milk, the milk turns purple and kind of slushy. I know it sounds gross, but it’s so good–I think it works well with the Grape Nuts because they don’t get soggy. I like the Wyman’s brand of wild blueberries because they’re very small–they have more flavor that way and they thaw out in the milk faster. In the mornings, I also prep my lunch: Cold Almond Joy Oatmeal. I wrote about this recently and you can find the recipe on this post. But it’s basically oats, milk, cocoa powder, chia seeds, maple syrup, chocolate chips, coconut, almond extract and coconut extract. I put it all in a mason jar and shake it up, then put it in the fridge and lunch is ready when I am. I usually have a piece of fruit (I’ve been into pears lately) with it as well. 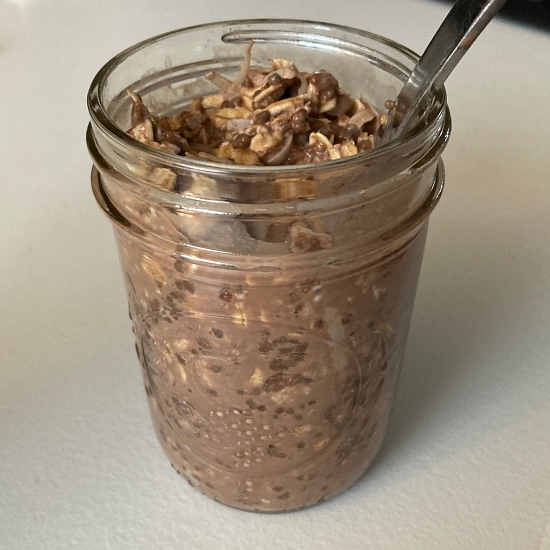 What I’ve Been Reading… 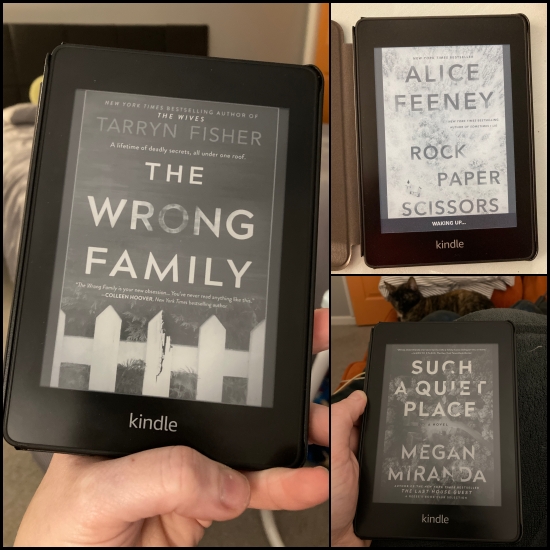 The last I wrote about books was that I had just started a book called ‘Rock Paper Scissors’ by Alice Feeney. I finished that one and gave it 4 stars. It kept me guessing all the way until the end. Not so much as a “big reveal” but little tidbits here and there throughout the book. You’re constantly trying to piece all of those little things together to figure out what it means.

After that, I read ‘The Wrong Family’ by Tarryn Fisher and gave that 4 stars as well. It was very different from the publisher’s description, in my opinion. If you like psychological thrillers in general, definitely give this one a try. The publisher’s description doesn’t do it justice; it was much deeper than described and didn’t follow the usual “formula” for the genre.

I’m currently reading ‘Such a Quiet Place’ by Megan Miranda. I’ve been struggling with this one to the point where I finally decided I’d give it one more chance and if I couldn’t get into it, I’d just quit reading and move on to something else. Thankfully, it got much more interesting shortly after that, so now I am excited to finish it. I’ll write more about it when I’m done with it.

What I’ve Been Watching… 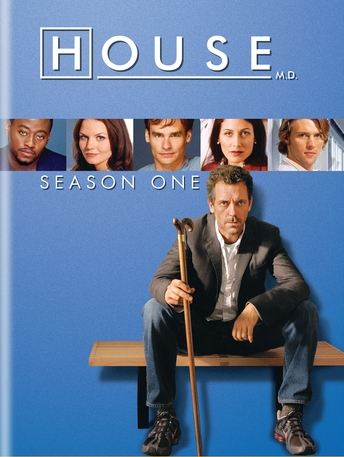 Lately, I’ve been watching the whole series of House again (I just started Season Two). It’s been so long since the show ended (10 years!) and I’m not sure what made me think of watching it again, but I started from the beginning last month. I’ve actually been reading more than watching anything, though–I’ve already finished five books this year! That’s a LOT for me.

I did binge watch a show on Netflix, though. It’s called ‘The Woman in the House Across the Street from the Girl in the Window’. Yes, that’s the title. When I first started watching it, I had the feeling I’d seen it before. And I knew I’d read a book that I figured it was based off of (‘The Woman in the Window’). So I was kind of confused. 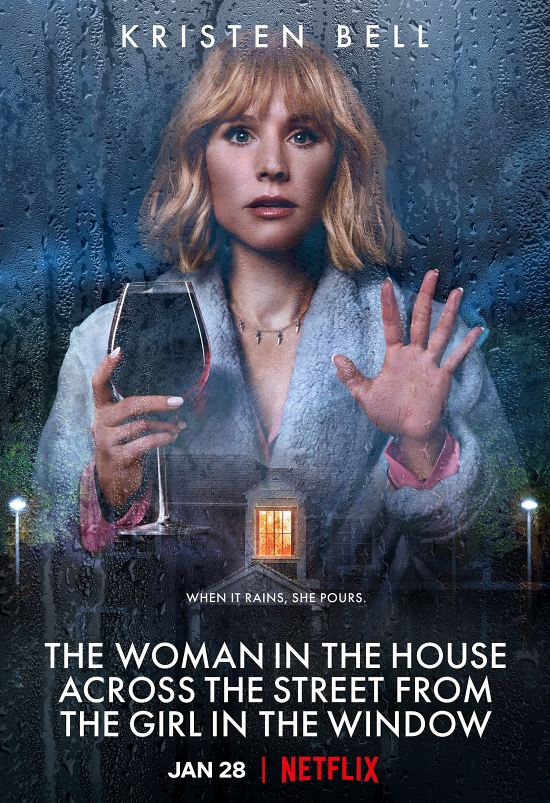 Then it hit me that it was a parody of all the relatively recent popular psychological thriller books–‘The Woman in the Window’, ‘The Girl on the Train’, ‘The Couple Next Door’, etc. It’s like there is a formula to those books, and you just change around the characters and situations.

Once I realized that it was a parody, I thought it was a hilarious idea. It wasn’t a laugh-out-loud kind of parody; it actually was a really interesting show! But you could definitely pick up on all the clichés for the psychological thriller genre, which was fun.

What I’ve Been Listening To…

When I work in the garage, my tools are loud and I’m constantly putting on hearing protection. It’s too difficult to listen to podcasts like I used to when I was doing the insulation and drywall in 2020. So when I’m in the garage, I listen to my 90’s music (it never changes).

However, I’ve been listening to podcasts when I clean or put away laundry (or when I was driving to and from the vet so many times in December!). I’ve actually not been listening to my usual true crime podcasts; it’s not that I’ve lost interest, but they’re usually long episodes and I like picking shorter ones when I’m squeezing them in here and there. Here are the ones I’ve been into… The VeryWell Mind Podcast – I’ve only listened to a few episodes of this, but so far I really like it! The first one I listened to was about overcoming insomnia (which is something I’ve battled my entire life). It was very different and refreshing from the usual advice you hear about sleep. (That was Episode 140, if you’re wondering.) The episodes are anywhere from 10 to 40 minutes and they are basically about bettering yourself.

Stuff You Should Know – I’ve been listening to this podcast for years, but it’s still a favorite. This is my go-to for a light-hearted, interesting, wholesome, funny, engaging listen. I’ve learned so many cool things over the years about the most random topics (I most recently listened to an entire hour about “Rock Paper Scissors” (the hand gesture game, not the book I mentioned!). I adore the hosts, who have great chemistry together. I usually listen to this podcast while I’m driving. The episodes are longish, at about an hour, but even if I can only listen to half of one, I really enjoy it.

For Those We Lost – I don’t know how I came across this one day, but it has people telling their stories of loved ones that have passed away due to COVID. The host talks with people who have lost a spouse or child or parent, etc., to the virus. It was very eye-opening to hear from real people who have gone through something so tragic.

Beautiful/Anonymous – This is another podcast I’ve been listening to for years. I listen to this one almost every night when I can’t sleep. The host’s voice is SO soothing and the show just has a mellow and relaxing feel to it. Basically, people call into the show hoping to get on the phone with Chris (the host), who will then have a one-hour conversation with them. He knows nothing about who he’ll be chatting with, but he’s a great conversationalist and the talk isn’t awkward at all. People have fascinating lives and I love hearing their stories.

And that’s about it! If you feel like sharing, tell me what YOU’VE been eating, reading, watching, and/or listening to 🙂