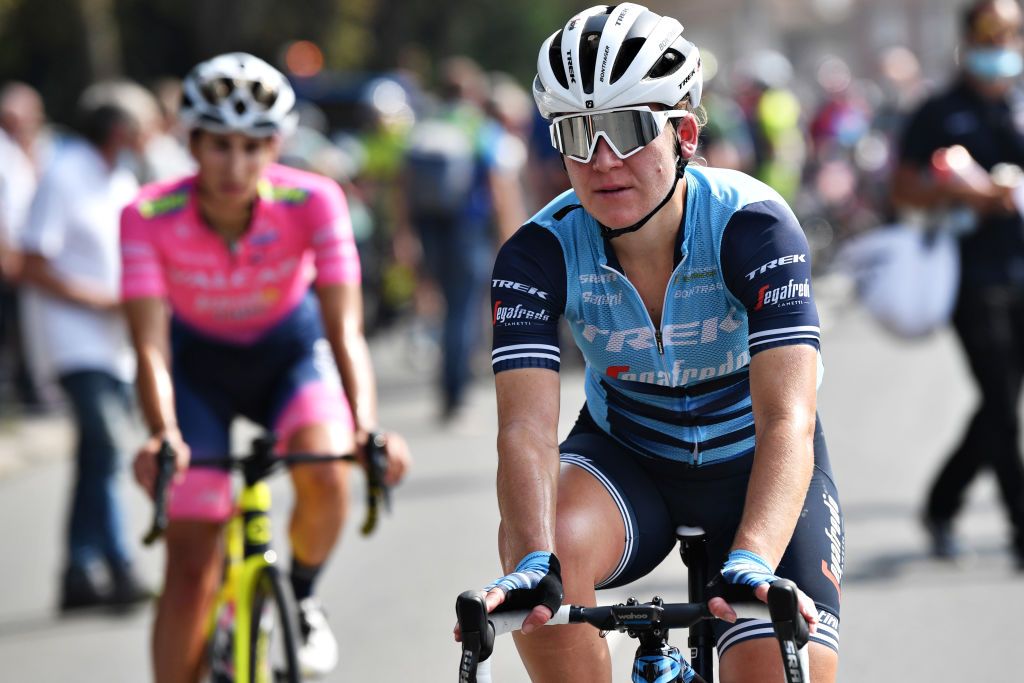 
Australian rider Lauretta Hanson heads into her fourth season with Trek-Segafredo continuing to embrace the role of domestique among a team filled with big-hitters, following a year where her contribution to the success of her teammates has been more evident than ever.

Hanson’s drive to work even harder for her Trek-Segafredo teammates has only been intensified by the faith shown in her with a two-year contract. After ticking off her goal of racing for Australia at last year’s World Championships, she also wants to put those valued domestique skills to use for her nation again in 2022.

“It’s a big year for sure, we’ve got Commonwealth Games and then a home Worlds in Wollongong and the Women’s Tour de France so there’s a lot of big events and a lot of goals to focus on,” Hanson told Cyclingnews while recently in Adelaide.

Form was something on which Hanson wasn’t short at the start of 2021, stepping onto the podium at the Australian Road National Championships, even though the course, with its repeated climbs of Mount Buninyong, doesn’t play to her strengths.

This year she missed the race, first pinning on a number afterwards at the Santos Festival of Cycling, with stage 1 “a bit of a lung buster to blow out some cobwebs”.

That was because she had a longer than usual time off the bike following surgery to try and remedy saddle issues that resulted in permanent soft tissue swelling which threatened both comfort and performance.

“For me, part of it was that it was getting so uncomfortable that it was starting to change my position on the bike, which is why I chose to have surgery,” Hanson said.

“So, it is comfort but also performance as well because I can’t race if I’m having knee problems because of something else and I can’t race if I’ve got saddle sores that are so painful that I can’t sit on my bike.

“It’s a tough decision to make because it [surgery] is no guarantee that it’s going to fix the problem completely, but hopefully it’s at least an improvement.”

A problem that no one talks about

The issue of saddle pain, particularly resulting from pressure on the soft tissues of the vulva, may not be an issue that is widely discussed, but Hanson said she felt that knowing others dealt with the same problem made it easier to find a path through.

“I’ve come to realise that there are a lot of people who have similar issues but no one talks about it, so no one knows if there is anything they can do about it or if they are kind of the only one?

“I chose to have surgery after talking to other riders who had similar issues and they were able to give their insight and their experience,” Hanson explained.

“It helps you make a decision and makes you realise that you’re not the only one with problems. It’s nice to know that there is possibly a solution or something that can maybe make it a little bit easier because riding a bike is quite harsh, especially on the female anatomy.”

Hanson said in late January that while the time off the bike following the surgery meant her fitness was “a little bit off at the moment” she was hoping to be pretty close to her best by the time she started the European season in late February at Omloop van het Hageland, Le Samyn des Dames and the Healthy Ageing Tour before building to the Classics, which are always a key part of her season.

Road Worlds in Wollongong in September is also among her goals. She had yet to complete her planned course reconnaissance when Cyclingnews spoke to her in late January, but Hanson is keen to ride, despite the road race circuits around Wollongong including the climbs of Mount Keira and Mount Pleasant.

“I’m definitely putting my hand up and I’d like to try to be part of a strong Australian team,” she said. “It’s a tough circuit, but you still need workers to help you get there.”

Hanson may have shown that she can excel in that worker role but selection for the Australian team, particularly when it comes to a home Road Worlds, is never easy.

Nor, for that matter is securing a place in the Trek-Segafredo lineup for Paris-Roubaix that swept up three top-10 spots in the race at its first edition. Yet 2021 was a year where Hanson not only started on the front foot at the Australian Championships but continued to step up throughout the year.

After securing third in Buninyong a month later in Europe, Hanson played a crucial role in supporting Ellen van Dijk to victory at the Healthy Ageing Tour, before heading into the Classics. Later, she was part of the team at Tour de l’Ardèche that took three stage wins, each with different riders, and where Hanson herself stood on the podium on stage 6. Add to that a ride into the fabled Roubaix velodrome as part of the winning team and a debut appearance at Worlds for Australia at Flanders and it was quite a year for Hanson.

“I’m quite happy with 2021 as a season, I was really able to make a big difference for my team and really support them in quite a few big races,” said Hanson.

“I could see the work that I’ve put in and the step up that I’ve made and my teammates were also able to recognise that and really appreciated what I was able to do with them and for them last year.”

Now, the 27-year-old from regional Victoria faces 2022 with her first two-year contract in hand as a reward for a job well done at one of the World’s top teams.

“It’s nice to know that they trust me enough to think that I’m worth keeping for another two years,” said Hanson.

“It makes me feel more confident in myself and I want to work harder and to help my team-mates even more. I know that they trust me to do my job, so I want to make sure I do it well.”