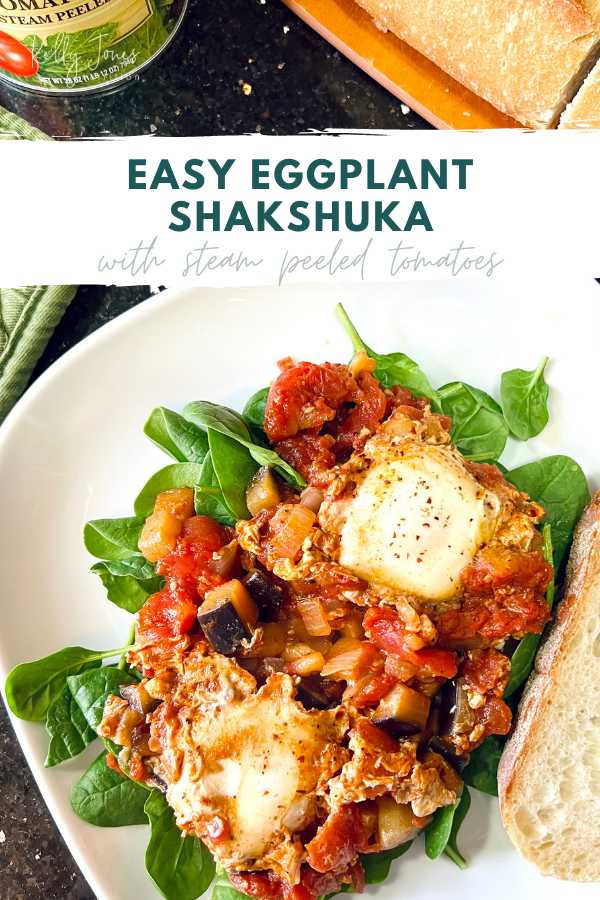 
Years ago, Shakshuka was a dish I’d only tried at a few restaurants under names such as “baked eggs” or “eggs in purgatory”. When Tim and I ordered it at a quick serve Philly Israeli restaurant under its proper name, we were blown away! It was too good to only enjoy when we happened to be in the city on a rare Sunday (they only served it once a week) so I knew it was time to start making it at home. Since then, I’ve made a variety of tweaks to my at home versions, but this easy eggplant Shakshuka, made with steam peeled tomatoes, is my favorite so far!

This post is written in partnership with Pacific Coast Producers, a leader in steam peeled tomato production. Thanks to them for making it possible to distribute this information! As always, I only engage in partnerships with those whose philosophies align with my own.

It was even news to me when I learned that shakshuka actually originated in North Africa, rather than Israel where it’s been enjoyed since the mid 1900’s. While I enjoy it for any meal, this dish is made of stewed tomatoes, poached eggs and a variety of seasonings. While you can certainly use fresh tomatoes, canned tomatoes make this an easy dish to make when you’re running out of fresh ingredients and need to run to the pantry. Plus, using steam peeled canned tomatoes means you’ll get a brighter color and better quality year round! Traditionally you’ll see the addition of cumin and paprika, for example. There are many versions now from a seasoning perspective (such as the Italian eggs in purgatory) and when it comes to other ingredients, such as bell pepper and even meat in some cases.

The Middle Eastern za’atar flavors are what I’ve grown to enjoy most. Za’atar was a new-to-me seasoning blend courtesy of that same Israeli spot in Philly (Dizengoff, if you’re wondering) and it’s a spice blend I now always have on hand. Key ingredients are dried oregano, marjoram, sumac and toasted sesame seeds, with some blends adding thyme, coriander, and/or lemon. This easy eggplant shakshuka obviously utilizes eggplant as a great nutrient rich addition and bulking agent from a texture perspective. The vegetable provides nostalgia, bringing me back to my Italian grandmother’s cooking. While it has an Indian descent, eggplant is used in a variety of cultural dishes, including those of Middle Eastern descent.

While I’ve only ever made shakshuka with canned tomatoes, I now only make them with steam peeled canned tomatoes. Canned tomatoes that go through steam peeled processing tend to be of higher quality and are more environmentally friendly. Since low steam pressure is used for a short period of time, resources are maximized while a higher quality texture and color are retained. Since no chemicals are used, there is reduced water waste and 100% of the tomato is used! Evaporated tomato water is reused for steaming and peels are repurposed for items such as tomato paste – having 0% food waste is a big deal in our food system and it’s so easy to support by looking for “steam peeled” on your canned tomato products. If you’re at all on the fence about canned tomatoes, be sure to read this post.

When Should You Eat Shakshuka?

It may tend to show up on breakfast and brunch menus at restaurants, but shakshuka can be eaten literally any time of day. Most often in my home, we enjoy shakshuka at night for dinner and then have leftovers with breakfast or lunch the following day. For us that is because we wake up ready for breakfast and want something that’s been made in advance or can be cooked and on the table in under 10 minutes. This easy eggplant shakshuka isn’t hard, but it is more of a 25 minute meal. Leftovers are perfect after a training session since it provides high quality protein along with vitamin C and antioxidants from the steam peeled canned tomatoes. If you are more of a mini-meal person, this absolutely can work for a snack, too. I have athlete clients who will eat it as a post-workout snack along with crackers. Which brings me to the next question you might have – what should you serve with shakshuka?

What to Serve with Easy Eggplant Shakshuka

As we go over with all of our clients and cover in many of our recipe posts, it’s good if most meals can check the following boxes: starch, protein, color, fat and flavor. This easy eggplant shakshuka (as with most other varieties) has the protein, color, fat, and flavor covered, but is missing our friend starch, to provide energy to the brain, organs and muscles, as well as more nutrients, too. If you have a delicious pita bread available locally, that’s an easy option. We buy extra when we make it to Dizengoff, but also stock up on Wegman’s brand pitas, too.

What’s easier for most people is to pick up a trusty loaf of bread at the grocery store or local bakery. I tried baking my own sourdough at the start of the pandemic and after a few loafs I just couldn’t keep up with keeping my sourdough starter alive, so at the bread counter is where you will find me! Leftover bagels or English muffins can work, too.

While shakshuka brings plenty of delicious flavor on it’s own, you may want to top with more. I love spicy flavors so, will often add some harissa whether in the shakshuka or on my bread. Fresh parsley or oregano would work as well. If you want a bigger meal or are planning a brunch, a nice creamy hummus is a perfect addition with harissa, more za-atar, and warm pita.

If you haven’t yet, click to learn more about steam peeled tomatoes and to find them near you and stay tuned for two more easy steam peeled canned tomato recipes in the coming month!

This easy eggplant shakshuka is nutrient rich, filling and made with steamed peeled tomatoes for both ease and quality!

5 Plant-Powered Pantry Meals I Can’t Reside With out

Lowering Your Danger for Prostate Most cancers

What’s Eco-Anxiousness & How Do You Deal with It? – SheKnows

What’s Eco-Anxiousness & How Do You Deal with It? – SheKnows