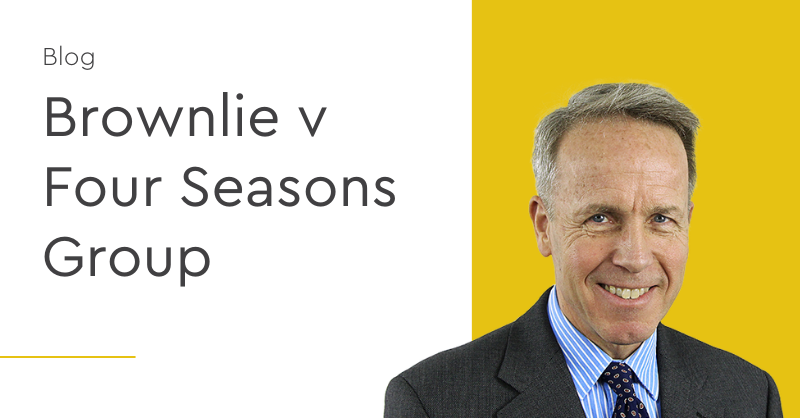 
Today the Supreme Court has handed down its Judgment in this long running case, and in plain terms, Lady Brownlie has won the Appeal.

The full Judgment is 134 pages long, and can be read, along with the Court’s Press Release.

In 2010, Lady Brownlie and her husband, the distinguished international lawyer Sir Ian Brownlie QC, went to Egypt. Whilst staying at the Four Seasons Hotel in Cairo they went on a “Desert Safari Tour” which was organised by the hotel. They were accompanied by Sir Ian’s daughter Rebecca who lived in Egypt, and her two young children. The tour took the party over rough terrain, and their vehicle overturned. Tragically, both Sir Ian and Rebecca were killed, and Lady Brownlie sustained serious injuries.

Lady Brownlie returned to the UK, and shortly afterwards she instructed Kingsley Napley to commence legal proceedings. We expected it to be a relatively straightforward case. First, the Brownlies were passengers in the vehicle, so it could not possibly have been their fault. Second, the proposed Defendant, the Four Seasons Hotel chain, is a substantial international business with significant presence in the UK.

We sent a Letter of Claim to the Head Offices of the Defendant, which are in Canada. We expected there to be some discussion about jurisdiction, and the correct corporate entity within the Four Seasons Group to be named as Defendant, but we hoped that we might soon move to settlement negotiations with the Defendant’s insurance company. This was because there could be no defence on liability, and Sir Ian and Lady Brownlie were based in the UK. Thus the losses to his estate, and Lady Brownlie’s dependency all arose in this jurisdiction.

Unfortunately, the Four Seasons Group chose a different path. They refused to co-operate with us in identifying the correct corporate entity, and they also challenged jurisdiction. Cutting a long story short, this resulted in the case going through the High Court twice, the Court of Appeal twice, and the Supreme Court twice – most latterly in January of this year.

It is in that Appeal that the Court today gives it’s Judgment, and Lady Brownlie has won with a resounding 4 – 1 majority.

This 10 year legal battle has not been about the substantive case. It has been concerned with a much narrower point of whether the case passes through the “jurisdictional gateways” that will allow the English Court to hear it.

On the Claimant’s side, our answer has been that the rules are clear and thus the English Court does have jurisdiction to hear the case. The Defence team disagreed, and therefore we have spent nearly 10 years locked in a protracted and increasingly complex legal debate.

The Supreme Court has taken the opportunity to review some of the previous decisions by the English Courts, and to affirm their authority. Therefore, not only is it a vindication for Lady Brownlie, it is also very helpful to other claimants who may find themselves in a similarly tragic situation.

The case will now go back to the High Court, and it is to be hoped that it will soon be resolved, as we would expect for a case that is at heart so difficult to defend.

FAQs – What does this mean for travellers and tourists?

1. What is a travel claim, and does the phrase have a precise meaning in law?
There is no precise definition in law, and a travel claim can include everything from reimbursement for the cost of a holiday that is ruined because the accommodation is substandard to serious personal injuries arising as a result of things like car accidents, workplace injuries or clinical negligence in a foreign hospital.

2. What sort of travel claims do you deal with?
At Kingsley Napley we specialise in only serious personal injury and clinical negligence cases, and the travel cases that we deal with reflect that.  As in this particular case where our client suffered serious injury in a road accident in Egypt and her husband was killed.

3. Can I bring a travel claim if I don’t have travel insurance?
Yes. The claims that we deal with are those where you are suing a third party, so it is their insurance company that has to pay. That said, if you have travel insurance, you may also be entitled to no-fault compensation from your own insurers.

4. What does this case mean for people who have the misfortune to be killed or injured in foreign accidents?
The Supreme Court’s decision has made it easier for them to bring claims in the English Courts. The rules have always allowed this, but the Defendants, in this case, brought an Appeal which said that the rules had been misapplied in some of the previous cases and that it should in fact be much more difficult to get a claim into the English Courts.

5. So does that mean that there is a new law?
No. The purpose of the Supreme Court is to have a clearer interpretation of the law as it stands. It has said that if an English person is injured or killed in a foreign accident (outside of the former EU) and suffers physical or financial damage in this country, then the “jurisdictional gateway” will be open to them, and they can bring their claim in the English Courts.

6. Are there different rules for European and non-European countries?
Yes. The answer to this is complicated, because of the transitional arrangements involving Britain’s departure from the European Union, but in essence, European cases still have different rules. This particular only applies to those arising elsewhere in the world.

7. If I have an accident abroad, who do I sue?
The simple answer is that you sue the person or company responsible. As with a claim in the UK, you will need to make sure that that person either has the means to pay your compensation or legal costs or has an insurance policy for that purpose. Typically that means that the claim either has to be against a big company, such as a hotel chain, or a driver with full car insurance.

8. Is it ever possible to bring a claim against an English Travel Company?
Yes it is. For many of us, our holidays are “package holidays of one sort or another, and this means that claims are covered by the Package Travel Regulations of 1992. In essence, these regulations say that if you book a holiday through a package tour company like Thomsons, and something goes wrong on that holiday, you don’t have to worry about suing your hotel, you just sue Thomsons in the UK and their insurers have to meet any claim.

9. Do I have to check the fine print before I book a holiday?
Yes you should, and when you book a package holiday you will often find that the conditions make it very clear that the UK tour company is simply acting as an agent for a foreign hotel, so it is not a true package holiday and any claim will still have to be against the hotel.

10. You are a lawyer who deals with travel claims.  Has it put you off going on holiday?
No, not at all. I would though advise you to follow some common-sense measures, which are as follows:-

If you would like any further information or advice about the topic discussed in this blog, please contact our Medical Negligence and Personal Injury team at claims@kingsleynapley.co.uk

Terrence Donovan is the Head of the Medical Negligence and Personal Injury Department. He has a national reputation and is one of the most respected and senior solicitors in the field.

‘One other Unequal Burden’: Working with Lengthy Covid

Strongman Mark Felix Suggestions For Lifting In Your Late 50s

‘One other Unequal Burden’: Working with Lengthy Covid