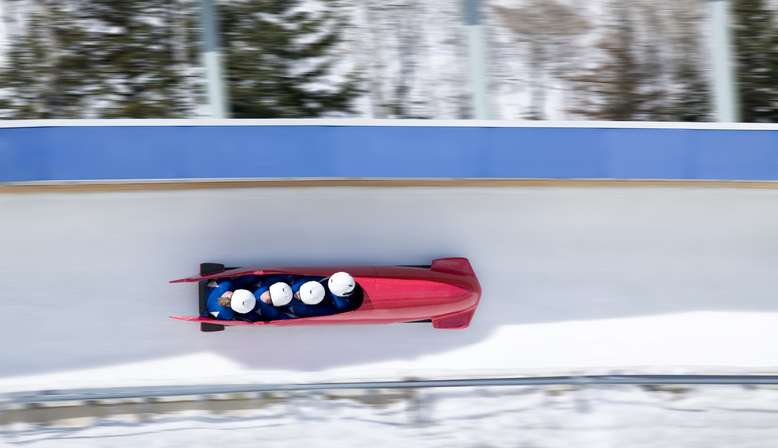 
Over the decades, there have been several athletes around the world who have competed in both the summer and winter Olympics, but there are two sports that seem to be more connected than the others: track and field and bobsleigh. Five Canadian sprinters have competed in both sports at the Olympic Games, so what’s the connection?

The sprint and bobsleigh connection

There are two factors that make sprinters good candidates for bobsleigh: speed and power. When you start a bobsleigh run, you only have 30 metres to get a 300+pound sled moving as fast as possible, so you need to be fast and very strong.

Of course, sprinters already have plenty of speed, and they spend hours in the gym working on power and explosivity, so they’re already in a great position to be good bobsleigh athletes. For many of them, the only missing link is weight. Phylicia George, for example, who competed for Canada in the 100m hurdles at the London 2012 and Rio 2016 Olympics and who won bronze in the two-women bobsleigh in PyongChang in 2018, had to put on 20 pounds of lean muscle when making the transition from the track to the bobsleigh.

Of course, there are some differences. When you sprint, you’re moving quickly, but when you’re in a bobsleigh, you’re moving at 150km/hour. The adrenaline rush that comes with hurtling down an ice track at breakneck speeds is also not for everyone. From a technical perspective, there is a bit of a learning curve moving from rubber to ice, which George described briefly in an article she wrote for Olympic.ca: “I had to learn to spend more time on the ground with each step to create power and force, in stark contrast to the bouncy reactiveness that sprinters are used to,” she said.

George is not the only Canadian who’s had success on the world stage in both track and bobsleigh. Four other athletes join her with the distinction of being both summer and winter Olympians in the two sports, including:

Glenroy Gilbert: Gilbert competed in five Olympic Games. He is most well-known for running the second leg of the men’s 4x100m team that won gold at the 1996 Olympic Games with  Donovan Bailey, Robert Esmie, Bruny Surin, and Carlton Chambers. He also competed in the bobsleigh at the Lillehammer 1994 winter Olympics.

Bryan Barnett: Barnett ran the 200m at the 2008 Beijing summer Olympics, and competed in the bobsleigh at both the Sochi 2014 and PyeongChang 2018 winter Olympic Games.

Oluseyi Smith: Smith ran on the men’s 4x100m relay team at the London 2012 Olympics that finished third but was later disqualified for a lane violation, and went on to compete in the bobsleigh at the PyeongChang 2018 Olympics.

Lloyd Guss: Guss ran the 400m hurdles at the 1984 Los Angeles Olympics, the competed in the bobsleigh at the 1988 Calgary Olympics.